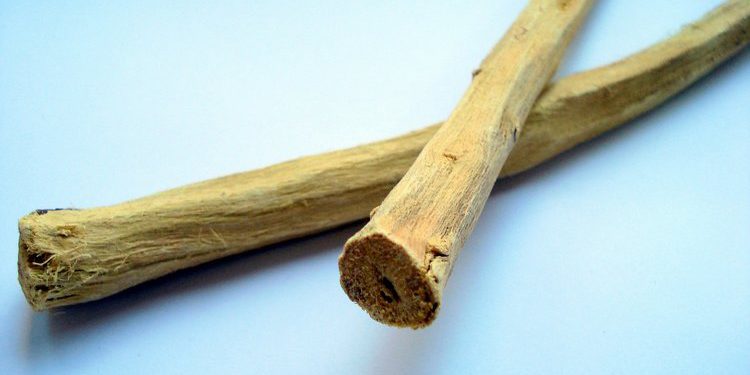 A herb belonging to the pea and bean family, liquorice is cultivated for its underground stems that are used to flavour confectionery; it is also valued for its medicinal qualities.

Liquorice is fast becoming one of the hot new flavours you might start seeing on menus at the moment, as its interesting flavour marries well with all sorts of savoury dishes, particularly when used sparingly with fish.

Liquorice dates to ancient times and has been enjoyed throughout the ages from pharaohs to kings; liquorice roots were for example found in the tomb of Pharaoh Tutankhamen (1358 BC). The ancient Romans and Greeks encouraged the use of liquorice for its healing & medicinal properties. Even today the Aveda Company makes a comforting tea using the liquorice root. Liquorice comes in many more varieties than candy; it is used in teas, medicine, booze and food however the use of liquorice in candies is a far more recent practice.

Liquorice is derived from the root of the liquorice plant, Glycyrrhiza glabra. This is a small shrub, up to 1m in height, native to the Mediterranean and cultivated in countries such as Greece, Spain and Italy. The National Institute of Health says the plant’s root has a long history of use as a folk or traditional remedy in both Eastern and Western medicine. It has been used to treat heartburn, stomach ulcers, bronchitis, sore throat, cough and some infections caused by viruses, such as hepatitis; however, the NIH says there is insufficient data available to determine if liquorice is effective in treating any medical condition.Liquorice is also used as flavouring in food however many “liquorice” or “liquorice flavour” products that are manufactured do not contain any liquorice. Instead, they contain anise oil, which has the same smell and taste. In the Netherlands, where liquorice candy is one of the most popular forms of sweet, only a few of the many forms that are sold contain aniseed, although mixing it with mint, menthol or with laurel is quite popular. The most popular liquorice in the Netherlands is the zoute drop and many people say it is an acquired taste.

Liquorice is popular in Italy and Spain in its natural form. The root of the plant is simply dug up, washed and chewed as a mouth freshener. Throughout Italy unsweetened liquorice is consumed in the form of small black pieces made only from 100% pure liquorice extract; the taste is bitter and intense. In Calabria a popular liqueur is made from pure liquorice extract. Liquorice is also very popular in Syria where it is sold as a drink. Chinese cuisine uses liquorice as a culinary spice for savoury foods. It is often employed to flavour broths and foods simmered in soy sauce.

Liquorice has been used for all kinds of purposes throughout the ages but by far the most adventurous way would have to be Heston Blumenthal’s pairing of Salmon Poached in a Liquorice Gel. It’s not always easy to see how Chef Blumenthal’s creations can be simplified for the rest of us to prepare at home but this recipe should deliver the wow factor to any dinner party.

To finish and serve:

For the liquorice stock, place the liquorice and 500g cold tap water in a saucepan and allow to sit overnight so the liquorice dissolves completely. The following day, bring the liquid to a simmer, whisk it well and then strain through a fine sieve.

For the liquorice jelly, pour 100g cold tap water into a small saucepan and sprinkle the agar-agar over it. Bring to the boil, then simmer for 4–5 minutes, whisking occasionally and making sure that all the agar dissolves. Add the liquorice stock, whisk to incorporate and simmer for another few minutes. Blitz with a hand blender for 1 minute, then remove from the heat. Place a piece of clingfilm on a clean work surface and pour the liquorice stock through a sieve on to the clingfilm, letting it spread naturally. Allow this to set (approximately 1 minute), then cut the gel into pieces that are the same size and shape as the salmon fillets.

Poach the salmon in olive oil until the internal temperature of the fattest part of the fish reaches 45ºC (check with a cooking thermometer).

To finish and serve, put each piece of salmon on a warm plate sprinkled with the grapefruit cells or chunks, season with salt and place a liquorice ‘blanket’ on top of each one. Top the salmon with three coriander seeds and, at the last moment, dot the plate with the reduced balsamic vinegar.

Serve with vanilla mayonnaise and asparagus.